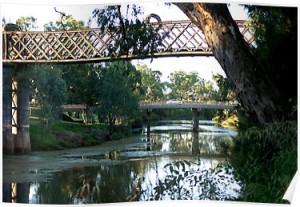 Dubbo: we were living in a caravan park (I forget now what it was called). This was the place where my parents learned, from a couple who lived in the caravan next to us, about school education by correspondence. We were moving so regularly that it was difficult to keep enrolling us kids into mainstream school.

I had made a friend called Sharon; I met her through another child from the caravan park, whose name now escapes me.

Sharon lived in a house a street away from the park; we very quickly became good friends.

Sharon lived with her father and a sibling, though I now cannot remember if it was a brother or a sister. Sharon’s mother had died very recently, and the grief in the house was palpable. So, we would often go down to the river to play.

On one such occasion, Sharon suggested we walk along the bank to the bridge that crossed over the river. As we were walking, we passed a boy of about 17 years who was taking photographs.

He had straight, blond hair, fair eyes, wore glasses and was wearing the camera around his neck, attached to a cord.

Once we arrived at the bridge we had a look underneath it, but it was rather unexciting so we set off back the way we had come.

Heading back, we again passed the two fishermen and communicated our greetings, which they returned pleasantly. Then we came across the older boy who had been taking photos. He ran down an incline to meet us and said ‘Hi’.

He looked very different to the last time we saw him. I immediately asked what had happened to his glasses and camera. He made a vague gesture behind him and said he had put them away. He then turned to Sharon and asked how old she was. To my surprise she said she was 15 years old, even though she was only 13 years old. I was 10 years old at the time.

Then, shockingly, he reached forward and gripped her nibble with his fingers. Her face went bright red and she cried out in pain. After a moment of stunned silence, I quickly turned and ran back to the fishermen to get help. I ran so hard and prayed that they were still where we had left them. As I came around the curve of the bank, I saw them and immediately screamed that my friend was being raped and needed help.

I then immediately turned back and ran to the place where I had left Sharon. I heard her screaming my name. I quickly looked behind me; the fishermen were following me at a run. Then all of a sudden I was stopped short by the attacker! He looked over the top of my head and was surprised to see the fishermen coming up behind me. He then turned and ran away up the bank and into the trees.

Sharon joined us, crying, saying that she was trying to warn me that when the attacker had seen me run, he had begun to chase after me. I hadn’t noticed, as all I could think about was making it to the fishermen to get help.

The fishermen asked if she was okay, and I thanked them earnestly. Then Sharon and I headed for home. I asked Sharon why she had lied about her age, and she said that she didn’t know. Sharon begged me not to tell anyone what had happened, so I didn’t.