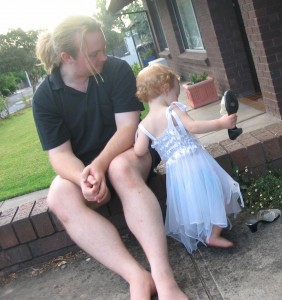 The role of a father is very important in the lives of their daughters. Research has shown that one trait shared by many successful women is a good relationship with their father.

It is important that their father treats them with respect, love and affection; that he shows interest in their achievements; that he tells them verbally and shows them with his actions and behaviour that they are worthwhile individuals. This will all help to establish confidence and self worth and will lay a strong foundation for the rest of their personal development.

The way a girl’s father relates to and treats their mother is also vital. Daughters use this example as a template of how they can expect to be treated when they eventually choose a mate. If their mother is treated with love and respect and is held in high regard, daughters will expect the same from their partners. When potential mates come along who don’t fit these criteria, the daughter will know through positive example not to settle for negative or abusive relationships.

In my case, my father was very jealous and controlling of my mother. My father preferred my mother not to shave her legs or wear makeup. If another man spoke to my mother, my father would become instantly jealous; this, despite the fact that my father would flirt outrageously with any woman he came in contact with, even in front of my mother.

If a man showed interest in my mother, even without mum having said anything at all, my dad would become angry with her; on occasion he even hit her.

When it came to his daughters, I felt that we were always treated as second-rate citizens compared to our brother. That being said, my brother suffered his own injustices from our father.

My father would often say to our mother that the girls were her problem and that he only had time for the boy.  At mealtimes, my father and brother would sit at the ends of the dinner table as these were positions of importance and only the men of the house could sit there. They were also given the choicest part of meals because they were the men.

I remember times when friends of my father would drop in unexpectedly and he would ask them if they wanted a cooked meal, and would order mum to cook for them as if she were a servant. Fortunately, the friends would look embarrassed and insist that they weren’t hungry.

For me, one of the most hurtful and devastating incidents of my father showing me what he thought of me was when we were out at my father’s friend Dave’s house. Dave had a wife, a son and two daughters.

I remember the adults were sitting at the kitchen table playing cards and drinking. I was in the lounge room while the younger kids, including my little sister, were playing in one of the bedrooms. The kids were making a lot of noise laughing, screaming and banging around.

My father asked me to go and tell them to be quiet or they would be in trouble. So I went down the hall to their room and told them to be quiet. The hall was dark, lit dimly by the light coming from the bedroom.

As I left the room, they shut the door to help keep the noise down and the hall was instantly sent into darkness. As I turned I ran straight into Dave who had come to check on the kids. I had my hands out in front of me and they made contact with Dave’s arm. He exclaimed at how cold my hands were and I told him I had poor circulation. My father came down the hall just as we were finishing the exchange and about to head back to the kitchen.

My father yelled at me to get back into the lounge room and I was apprehensive that he had turned into “Mr Hyde” due to his drinking.  He went back to the table, glaring at Dave. They finished the game and we went home.

When we were home my father turned on me and wanted to know what had happened in the hallway. I told him and he called me a liar and sent me to my room. I had no idea what his problem was but was glad to go to the safety of my room, because when dad had been drinking and was in this mood he didn’t really need a reason to go crazy at you.

Then to my absolute horror I overheard him telling my mother that he had found me (his thirteen year old daughter) making a pass at his friend!

I was stunned.  My mother told him he was being ridiculous, but he went on and on about how she hadn’t been there and how he had seen it with his own eyes. I am very grateful to my mother for refusing to believe him. However, for me the damage was done. I couldn’t understand how on earth my father could think this thing of me. I was thirteen: that was a world I just didn’t belong to. Also, if he really believed something sexually inappropriate was going on, why didn’t he have a go at his mate? Why on earth blame me, the child, his daughter instead of the adult?

The anger, disbelief and shame I felt were overwhelming. I decided that I could not stay in the house another day. I grabbed a change of clothes, intending to make contact with my brother and run away to him; he had taken my older sister in when she left home at 15.  That night, however, I fell asleep instead of climbing out the window. The next morning dad was sober and he and mum behaved like nothing had happened.

However, that night changed me forever.  I now knew what my dad thought of me and it still hurts me now, 28 years later.

Like my two older siblings before me, I left home at 15 years of age. I moved in with a girlfriend, Tania, who was 17 and living in her mum’s Trust house with her younger sister Krista, who was 14. Tania also had a twin sister, Robyn, who was living with her boyfriend.

Tania’s mother moved away to Queensland with her boyfriend and left the girls to manage their own lives. Their father had left after Robyn had been accidentally set alight by a candle when she was four. Robyn had third degree burn scars to 70% of her body.  These girls also had a poor example of a father and, in their case, the mother, too.

I got a job with Tania at Carnival Corner, at Colonnades, serving ice cream, milkshakes and other snacks.  Not exactly a career path but it paid the bills.

I was now safe and in charge of my own life and was free to grow up and make my own life choices but I was 15 years of age and my development was coloured by poor examples of men and relationships and by very low self-esteem. So I muddled through, having to learn by my mistakes which, without real support and direction, were many.

I now feel a very deep sense of injustice at all the things I have missed out on. I realise, looking back, that I was a pretty, intelligent and talented girl and that I had had the potential to have been successful in a multitude of areas.

All that is left for me now is to truly value the wonderful relationship I do have with my second husband, who is the best example of a father and husband to our two beautiful daughters, and to give our girls all the right examples, guidance, support and love.