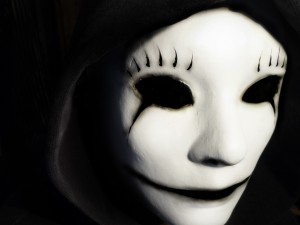 It was an early Sunday evening. The air was cool though the sky was clear with the hint of colour that signals the impending setting of the sun. My partner and I had just finished an invigorating game of mixed netball at our local sporting centre. After the usual, after game repertoire, with our team mates we climbed into our car and headed for home.

Feeling tired and not desiring to prepare our evening meal, we decided to pop into a Pizza Shop we would have to pass on our way. My partner chose to stay in the car while I went inside to order.

I happily ordered a large supreme pizza then sat down on a bench with two other adult male customers to wait.

Suddenly a very dishevelled man ran into the shop and slammed the door behind him. You could feel his distress and smell the fear as he fought with all his strength to stop a crazed looking man trying to open the door from the other side to get at him. You could see he was slowly losing ground to the larger assailant.

After a numbed second I jumped up and ran to his aid, throwing my weight, with his against the door. Seeing that the victim now had support, the crazed man ran off from the door. The victim shakily opened the door and looked out turning left to right to see if the man was indeed gone. He then proceeded to leave the refuge of the shop and head outside.

I grabbed his arm and told him not to go back out there, it wasn’t safe and that he should call the police. He shook off my arm and walked out the door. With a shaky breath I turned back to the bench and the two male customer still sitting there wide eyed and shocked. I looked to the owner behind the counter as I retook my seat on the bench.

Then with a bang the door flew open again and the victim rushed in, but this time his attacker was right on top of him and they were both inside only two feet away from the bench.

The men beside me jumped up and ran for refuge behind the counter with the owner who I saw grab for the phone to call the police.

I looked back at the victim and his attacker and could now see the victim on his knees; with his attacker behind him with some kind of rope or long cloth and was proceeding to garrotte his victim. There was nothing but madness in the attacker’s eyes and as I looked down at the victim I saw him relax and his eyes begin to glaze over with his impending death.

All I could think was. I can not just sit here and let this man die right in front of me.

I jumped up and threw myself at the attacker and tried not very successfully to loosen his grip around the poor victim’s throat. As I struggled with the attacker to loosen his hold on the victim, the door slammed open and my partner who was a very large man, body slammed the man on his feet and sent us all flying apart in different directions. Freeing the death grip the attacker had on his victim, causing him again to flee from the scene.

The victim shakily got to his feet and again stupidly left the safety of the shop. My partner asked what the hell was happening. He had been reading his “car magazine” and just happened to look up and see me struggling with two strange men in the shop. He then of course came to my rescue.

Just then the shop owner wide eyed caught my attention as the other two adult male customers’ came out from the safety of the shop counter. He said my pizza was ready and charged me accordingly. He also offered his apologies that this encounter had occurred in his shop.

I looked down at my hands holding the pizza and noticed for the first time I had smears of blood on them and down the front of my netball top. It was only then I realized what a risk I had taken and felt an urgent need to go home and wash of the entire experience.

This is a true story, this really happened to me.